From Rest to Quest: Semi-Absentee Franchise Ownership with Janet Asbury 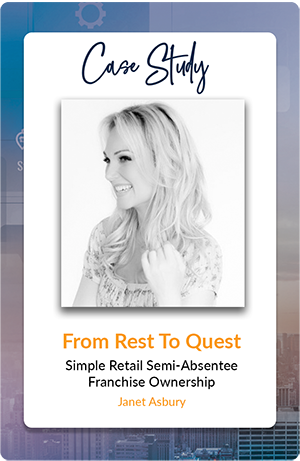 For some successful franchiser stories, it’s difficult to ascertain powerful platform ideations from endgame solutions amplified by years of expertise. Truth be told: Some business go-getters hop in and out of the self-governed franchise game, time to time, casting a picture inspiring enough to distract onlookers from its frame.

This isn’t to say, however, that such a frame doesn’t exist. Rather, it simply means that one’s campaign needn’t be linear—stretching from professional input to plan placement; initial growth spurts, onward into fledgling scaling opportunities; and from long-haul, upper-funnel retention strategies into multi-state outreach capable of sustaining a franchise in its entirety.

Fact of the matter is: Some franchises practically build themselves—and no one can pinpoint exactly where it all began. They can, however, swap snapshots of the same, above-mentioned picture—frame and all.

Our particular snapshot viewed is one capturing Janet Asbury’s rise to booming, independent business operation—launched partially from a history of adroit franchise management, that is.

See, for intuitive franchise designers like Janet, a franchiser’s tale really doesn’t have a discernible beginning—as if risen from dust to meet dawn’s opportunities on its own accord.

Janet was a tech solutions product consultant—keen on promoting her company’s growth, yes, but never abandoning the will to promote her own. Her education from Kellogg School of Management had taken her far—farther than most—and had established a firm foundation upon which future advancements might spawn.

As with any company ‘tree’ network of advancement, however, Janet’s wasn’t without bureaucracy—bureaucracy which, at the end of the day, framed advancement’s desire within the rigidity of desire for desire’s sake. She first crossed paths with Careyann Golliver, America’s Franchise Matchmaker, in 2004. Janet’s mind, unlike most in her predicament, was laser-sharp in its problem-solving accuracy: She wanted to be in business for herself—not anyone else.

To say “the rest is history,” in Janet’s case, does her story injustice. Indeed, Janet’s brief time with Careyann resulted in rapid success grounded in decisive foundation-work rivaling that of her previous company—which’d had years of nurtureement within a carefully pruned ecosystem of management, finance, tech development and marketing.

Careyann helped her learn about the day in the life of operating her handyman franchise in Chicago—then helping her navigate the tumultuous waters every fledgling franchiser faces when making big decisions—fast. Before long, Janet was receiving numerous top-sales awards in her industry: marvelous landmarks to complement her soon-to-follow Lifetime Achievement Award received just before selling her franchise in 2011.

Janet’s life took a new direction when a family member became ill—substituting the steady hill-ascent of franchise growth for the persistent dedication of familial care.

From Success
to Sabbatical

From Sabbatical to
Semi-Absentee
Franchise
Ownership

Our next snapshot: Janet, ever pursuant of self-governed success, is back in the game.

Ready to return to the world of business ownership, she retraced her steps—back to humble beginnings. Much more than a franchising redux, however, Janet’s next venture would be one launched from past experiences—and seven years of deliberation.

A franchisee’s downtime is rarely considered a vital business component mix ingredient—sadly so. Paying homage to industry hermitage, then, is to glean the micro-snapshots which beget the astounding successes which otherwise seem to “appear out of thin air.”

Once more, she sought Careyann’s coaching—a challenge guaranteeing the keys to some of the industry’s tightest-locked doors. Ready at the get-go for career transition, and armed with an ever-steadfast competitiveness, she evaluated the health and wellness industry.

With Janet’s competitive personality, she had grown bored and found herself seeking a new purpose and meaning for her days. She wanted to be involved with a business that symbolized what she embodied with health and wellness and it was important that her business model provided a positive impact on her community. Unlike her first franchise where she was involved full time, she was really wanting her new business to provide a lifestyle for her and not be a slave to the day-to-day operations.

From start to finish—from beginning to end, and from career rest to franchising success—Janet achieved her ultimate goal: semi-absentee franchise ownership. If her past was to be contemplated, her future was to remain attuned to the life-work balance she knew existed beneath her day-to-day professional wants, needs, doubts and aspirations.

Friends and family were to come first: a flexible work-life which nurtured everything in between actual hours of operation. Careyann guided her through the education finesse of semi-absentee franchise ownership, her pursuits within the wellness industry succeeded, she is expanding her business to multiple locations and—this time—the rest really is history.

But, as we all know, any events necessitating historical landmarks deserve to be talked about.

The Rest: History
with Careyann

An Afterward on
Self-Fulfillment

In many ways, sheer willpower plants the seeds for innovation. Semi-absentee franchise ownership isn’t a static deal, by any means—nor is it a neutral landing pad of comfort for independent business creatives with broad wings.

Careyann connected Janett to several franchise partnerships via her proprietary Franchise Matchmaker Process—a pursuit which ultimately made Janet fall in love with simple-retail franchise businesses within the boutique fitness category. Placed at the front line, and guided by Careyann on how to properly conduct the right due diligence every step of the way, she pressed onward to narrow her scopes—doing what she’d always done: create history from history.

Janet was awarded and became a multi-territory boutique fitness franchise owner in Chicago. Her franchisor of choices, itself, received the Fastest Growing Fitness Franchise award in Inc. Magazine’s 5,000 and 500—two years over. Partnered with top brands across every industry vertical, her franchisor soon received recognition as one of the Most Innovative Companies—featured on CBS, NBC and Shape.com.

Self-fulfillment is deep-seated, but it does indeed coordinate with one’s historical achievements. To catch another glimpse at Janet’s wild success, one need only browse several texts she’s left her footprint on, side-by-side, with Careyann:

“I am so thankful I had Careyann’s help and guidance during my recent franchise evaluation and purchase. She was a mentor, a coach, a business consultant, and never really felt like a salesperson, more like someone who genuinely cared and wanted to find me the best opportunity possible. I feel super blessed to have purchased the franchise I did, and I don’t think it would have even been on my radar if not for Careyann. She is one in a million and I wish her tremendous success.”