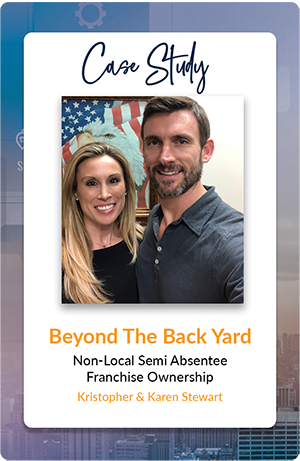 Location selection can make or break any fledgling franchise with physical components. Those seeking growth in the retail world often find themselves facing nonlocal, winding roads in search of a viable destination. This is why, today, prospective franchise owners turn to freestanding business structures operated at a distance:

An aspiration for new challenges can relieve the initial tensions of franchising, but professional assistance if often needed to transform dreams into reality. In one case, we turn to Kristopher and Karen’s story.

The two were established enough to explore new opportunities, intent on owning local breweries and fitness centers. Their preferred market was sold out, however: Local territories left little room between their doors and restrictive market frameworks. At every turn, it was incredibly difficult, if not impossible, to get one’s foot beyond opportunity’s entryways.

Kristopher and Karen eventually looked to areas beyond their community’s backyard as a viable option. Networking with franchise funding connections in surrounding Texas areas would be tough, undoubtedly. Still, it might garner enough wiggle room to help them establish local ownerships down the line.

Yet again, their need for expert help became undeniable. It was one thing to break into the ever-saturated brewery and fitness industries—but another thing entirely to establish a presence beyond local support systems.

A mutual contact introduced the pair to Careyann Golliver, relaying their search struggles. In many ways, Careyann would later suggest, neglecting one’s wants, needs, goals and dreams could lead to stagnancy. While semi-absentee franchise ownership is often grounded in the pursuit of these things, it’s all too easy to get lost along the way—prioritizing restrictive strategies over one’s initial passion for change.

Careyann helped them take those much-needed first steps down the road of self-discovery. To find the franchise funding connections they needed, they’d need to redefine their professional requirements. Then, they’d need to pursue free education to land the best funding options available—those with low initial costs and plenty of headroom for further investment.

At Careyann’s direction, Karen and Kris turned inwards—reanalyzing the experience and resources they already had. At the time, Karen was dutifully employed in Pharmaceutical sales, but her duties exhaustively hovered around the company’s own ceiling: a professional limit impassable even by organizational innovation.

Kris was in a similar situation: He’d reached his current position’s ceiling—and future growth within the business was unlikely. He wanted to leave this particular road behind, substituting a road’s end roundabout for new avenues. He felt they both needed a transitional period, of course, which was a feeling soon cemented into reality by a 90-day furlough.

The duo doubled down on the discovery phase, engaging and embracing baseline retail concepts, managerial strategies and franchise establishment. The more Kris learned, the more he felt the furlough was a blessing in disguise. Day by day, he and Karen’s vision of semi-absentee franchise ownership further solidified. They were excited—and Careyann, ever at their side, helped them direct the energy in a direction promising success as a destination.

The ultimate avenue taken was, indeed, one beyond their local community. It didn’t take them too far beyond their own backyard, however. With Careyann’s sharp eye for diamond-in-the-rough locations prepackaged for consistent growth, the two landed a multi-territory, essential-needs-based service business. It was a franchise of durable design, capable of weathering even the windiest industry storms risen from ever-changing trends—both local and abroad.

Kris and Karen have a bright future ahead. With predictable growth guaranteed, the decision even allowed the acquisition of a local mom-and-pop business: a ticket to the near-home franchising plan they’d initially envisioned. As the pair parted ways with Careyann, they headed for a first year of rapid business growth. Semi-absentee franchise ownership had finally become a reality: one grown from passion—securely framed by self-perpetuated industry education, passive growth strategies and Careyann’s biggest lesson of all:

Our professional passions not personal passions, ultimately, are the core of our successful business decisions—regardless of their strategic design. It’s easy to lose sight of them, but their rediscovery is worth its weight in tough decisions. Time and time again, they’ll loosen the binds of organizational stagnancy. Time and time again, our professional dreams set us free.

A Return to Local
Opportunity with
Careyann Golliver

“When I found Careyann, I was looking for an opportunity to move away from the corporate life I was living.  I had spent many years sacrificing time, energy and effort driving to the office every day to a job that brought me little satisfaction.  I wanted something I could build and grow for myself and my family.  My wife and I had explored a couple of different opportunities, but we really didn’t know where to start.

I was really pleased with the results, especially the well-defined, systematic approach to franchising.  The initial thought of franchising was somewhat daunting, but once we began working through your process, we became much more comfortable with the decision we were making.

As a direct result of working with Careyann, we were able to effectively evaluate a variety of franchise options, several that we would have never pursued on our own, and ultimately find a franchise organization and model that fit our goals and personalities well and that was built around a strong, supportive team.

I would recommend Careyann Golliver to anyone that may be interested in business franchising, especially those that might be on the fence but simply don’t know where to begin.“