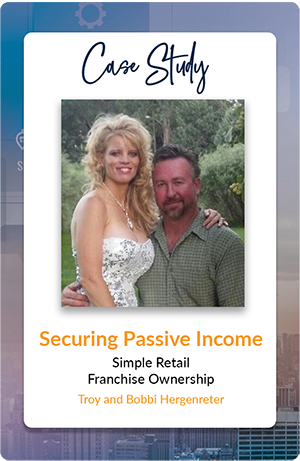 Negotiation is a key component of franchising: From the strategic design stage to networking, gauging future expenses is vital. In any business transaction, comparable product and service costs ultimately determine whether end goals can become a reality. Likewise, to franchise passive income plans is to become well-versed in identifying companies comparable to your own. At every turn, franchisers want to be in better positions today than they were yesterday.

For those new to franchising, the list of responsibilities inherent of networking can become nigh impossible to manage. Every decision impacts a franchisor’s revenue, output capabilities, quality control and even managerial style. While established franchises keep their franchisees aligned within one process, even the smallest of changes can disjoint an otherwise optimized business design.

But how do industry newcomers handle these hurdles?

The Art of Dodging
Bad Deals: How to
Tactically Franchise
Passive Income

For Troy and Bobbi Hergenreter, franchise pitches kept flying in. Fortunately, they had batting experience in the game of professional decision-making.

Bobbi came from the beauty industry. Having owned her salon several years prior to franchising, she valued hard work. With a sharp eye for opportunities, managerial resolve and a dedication to independence, her pursuit of a first franchise—and passive income—had established her decisiveness before offers had reached their doorstep.

As any new franchiser will say, however, the realities of franchising are grounded in industry experience. While she and Troy were pre-equipped with organizational decision-making skills, they knew these skills could be lost in translation—and easily.

Troy, himself, was already a self-employed business owner. Much like Bobbi, he didn’t want to work for anyone else. He wanted multiple franchises, putting the 14-to-16-hour workday lifestyle aside. Above all, he and Bobbi wanted to create a legacy able to withstand decades of industry shifts, trends and economical fluctuations.

When approaching the franchise world for the first time, Troy explained, they wanted to avoid being pitched to—regardless of the prevalent practices franchisers typically adhere to. Pitches would never go away—and bad pitches wouldn’t, either.

The pair first heard about Careyann on the radio. Before long, they approached her for professional guidance. First and foremost, they needed assistance with their initial franchise search. Having spent 18 months searching already, the two provided what information, insights and inspirations they’d gained along the way—and Careyann listened.

Careyann’s first mode of assistance was in helping Troy and Bobbi explore the core of their current search troubles. The two had a bad case of cold feet—and little more than industry education and professional guidance was likely to help them discover new opportunities. Thus far, they explained to Careyann, they’d managed to narrow down industry types they’d like to approach. Their primary pick was in essential services—as they had fewer overhead expenses.

When approached from a different angle, even the most conservative franchising plans can be reimagined. Careyann helped them dissect this primary decision—as it’d likely drive all future advancements towards their goal. In redefining their franchising requirements with Careyann, they discovered a hidden truth which shaped much of their decision-making process:

Education needed to be prioritized over every other aspect of planning—even when it came to deciding on an industry.

The “three-fold” franchising design—wherein both could remain actionable Corporate America while nurturing a new revenue stream—needn’t be engaged following high-expense learning, either. Careyann helped Troy and Bobbi explore not only franchise funding connections—but also free education opportunities. By acquiring both, the pair would minimize their initial expenses—and they’d be able to keep more options on the table.

How to Finance
a Franchise Passive
Income Plan

Despite Troy wanting to avoid paying cash for the right business, the two’s growing knowledge helped them reconsider their initial franchise plan’s direction. They warmed up to the idea of utilizing debt services to invest wisely—reworking their decision process around established financial forecasts.

Today, Troy and Bobbi pursue franchise options capable of transforming the passive income dream into reality. With Careyann’s help, they even adapted this plan to service-based businesses. After finalizing this franchise move, the two could pursue their second franchise venture with the comfort of self-sustaining, passive income.

It won’t be long before the two move forward in the world of simple retail. It’s a direction which requires franchising experience, as real estate can be a tough factor to balance, but Troy and Bobbi are confident. After all, experiences gained alongside America’s Franchise Matchmaker™  withstand the test of time—outfitting aspiring franchisers with the refined resolve which guarantees success.

“There was not ever any pressure. Careyann was always willing to share information or guidance to keep us on the right path and moving forward.

She was able to put us in touch with the correct people within the franchise. We didn’t go through email, leaving messages, waiting for so-and-so to get back to us. We were put in touch with the appropriate people that we needed to contact and have interactions with to do our due diligence properly.

There was no delay in the process. Working with Careyann was easy.  It was a pleasant experience. In fact, we’ll probably reach out to Careyann again when we’re ready for our next franchise!”